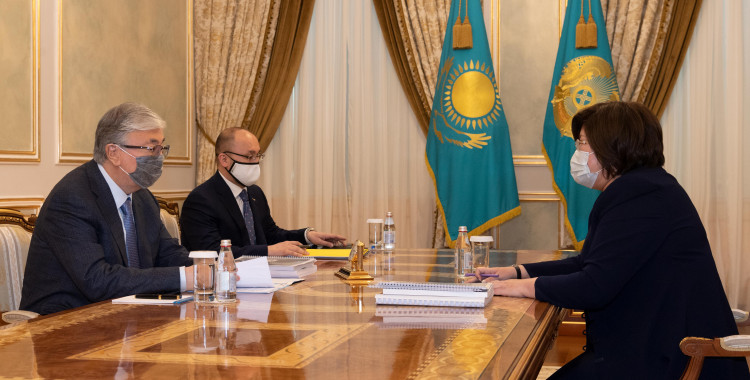 The President was informed about the human rights activities carried out by the Ombudsman’s Office, including important decisions taken on his instructions aimed at further strengthening the constitutional guarantees for the protection of human and civil rights.

Elvira Azimova also reported on measures taken at the legislative and executive levels to protect the rights of women, children, and persons with disabilities.

During the meeting, proposals were considered aimed at expanding support for non-governmental organizations engaged in human rights activities, continuing humanizing criminal legislation policy, as well as involving the Commissioner and representatives of civil society in the legislative process in the human rights sphere.

As for the decision for the enactment of the Law on the Ombudsman, the issue of providing state support to the institution of the Ombudsman and strengthening its capacity at the regional level was discussed.

President Tokayev noted the importance of continuing the activities of the National Preventive Mechanism for the Prevention of Torture and ill-Treatment, established in 2014, as a type of public control with the direct citizens engagement. The Head of State stressed the need to help restore the violated rights and legitimate interests of citizens and instructed Elvira Azimova to take necessary measures within the draft law on public control designed by the Government.

By the Presidential Decrees: