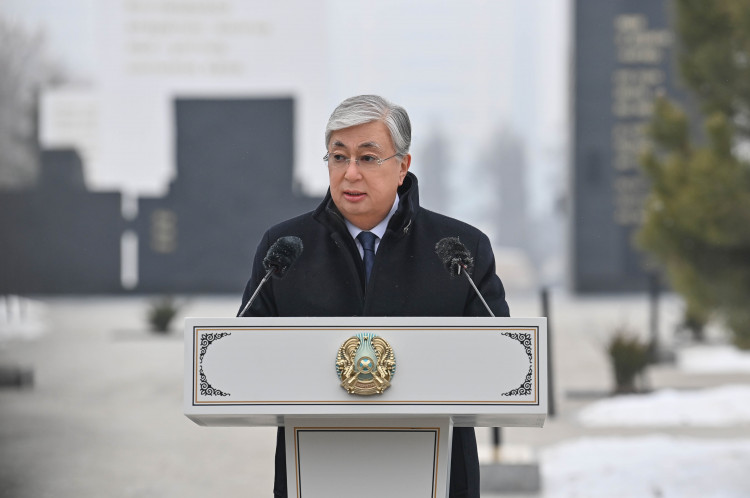 During his working visit to Almaty, the Head of State opened the “Tagzym" memorial, dedicated to the victims of the January events.

Kassym-Jomart Tokayev laid flowers at the stele. The participants in the ceremony honoured the memory of the victims with a moment of silence, followed by the national anthem. 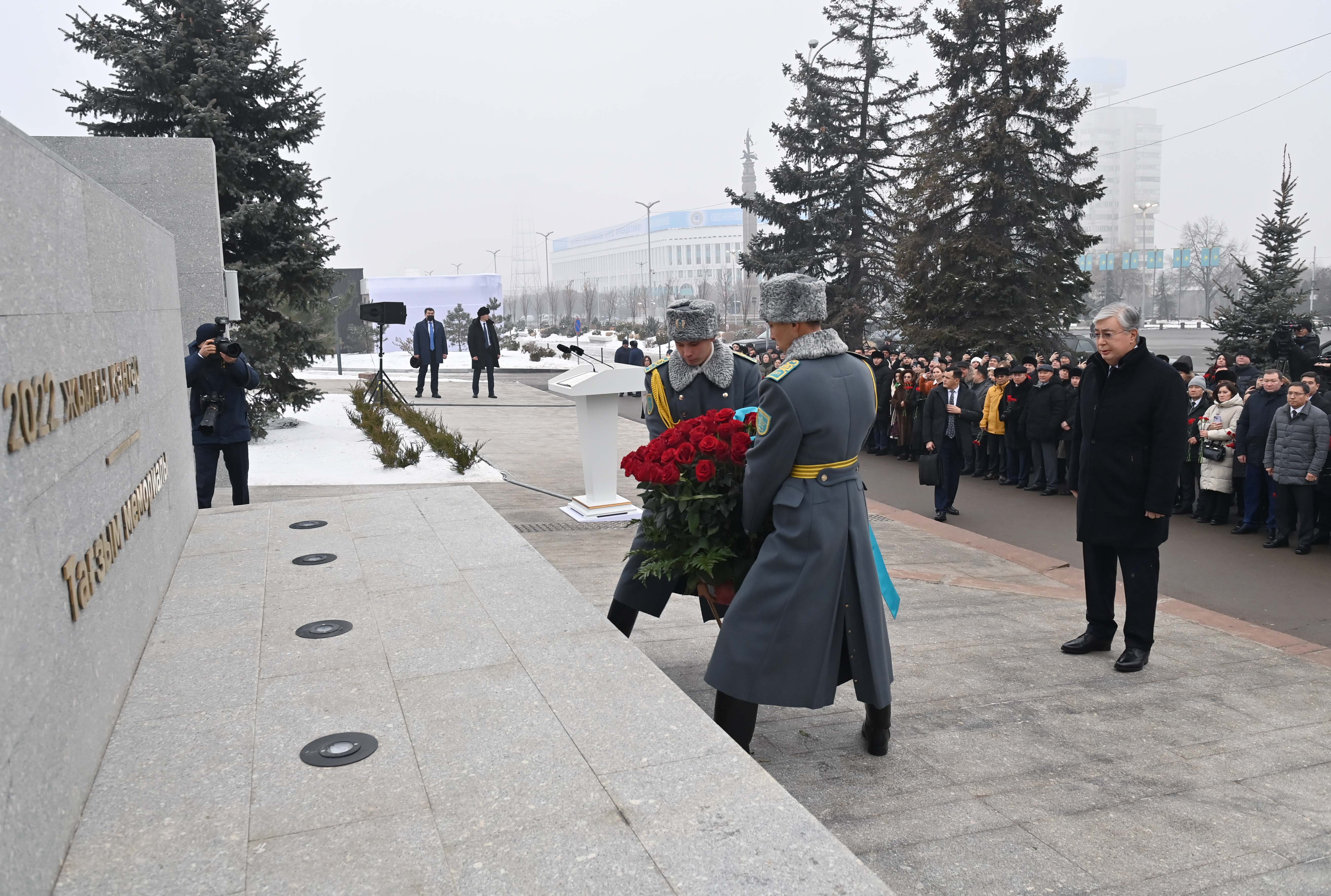 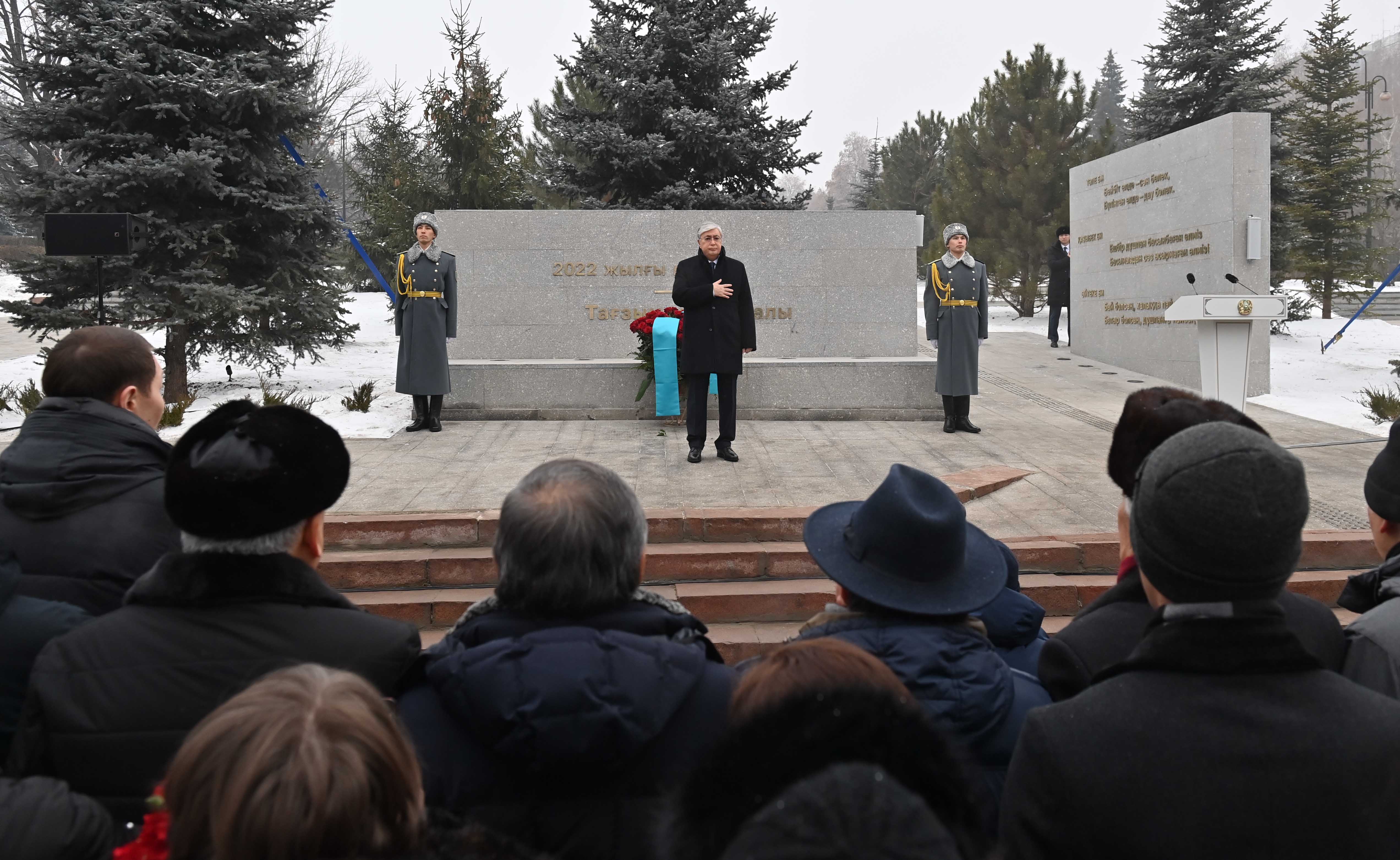 The President emphasized the special role of the memorial for all the people of Kazakhstan. As he noted, the Tragic January events were one of the most severe challenges since Independence.

“It was a time of trial for our people. The foundations of statehood were under threat. Moreover, it was a matter of whether we would be able to preserve our state. However, thanks to the unity and solidarity of our people, we have been able to confront all challenges resolutely, demonstrating unwavering determination and strength. We have put an end to the actions of the conspirators who tried to sow discord in society. Peaceful rallies held in several cities of the country escalated into mass riots. Almaty, the cradle of Independence, was especially hit hard by armed rioters. Bandits attacked law enforcement agencies, and looted weapon warehouses. Innocent civilians died as a result of their actions. Of course, destroyed buildings can be rebuilt. But unfortunately, the lives that have been taken cannot be recovered. We will stop at nothing to ensure that such a tragedy never happens again. Our common civic duty is to protect the peace and tranquility of the country and the unity of the people. For me, as President of the country, this is a sacred duty. Only in peace and harmony will we be able to achieve this goal,” the Head of State said. 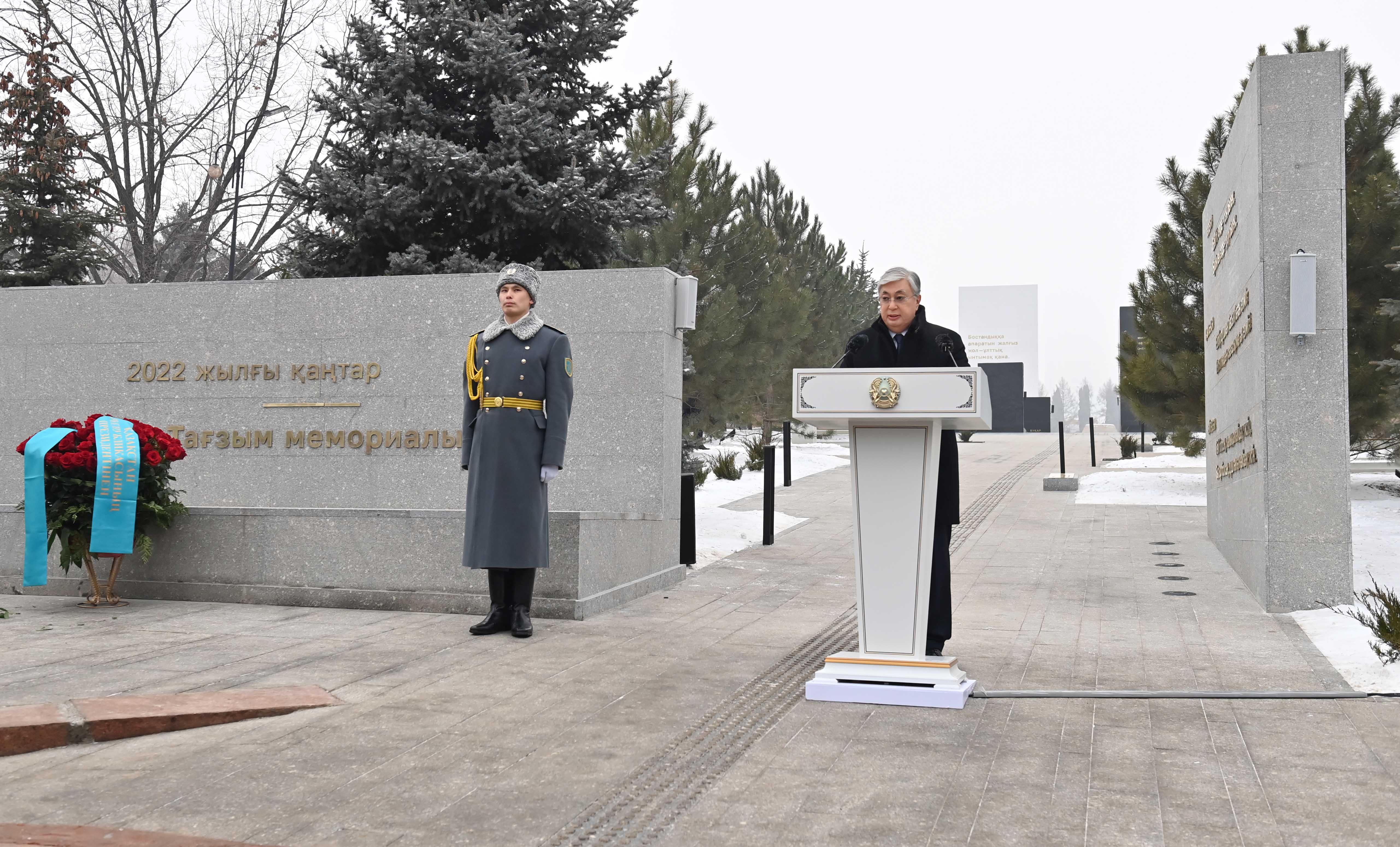 Kassym-Jomart Tokayev stressed that we must always remember the January events, which became the biggest test in the country`s history. Therefore, he instructed to perpetuate the memory of those tragic events and erect the "Tagzym" memorial.

“This monument has a deep meaning and great significance. It reflects the different stages of strengthening our statehood. Quotations of prominent representatives of the Kazakh people are carved on the stones. I am sure that these words, which unite the nation, will make us ponder. We erected this complex in memory of the victims of the January events and as an edification for posterity. I express my gratitude to the architects - the authors of this project and all the citizens,” the President said. 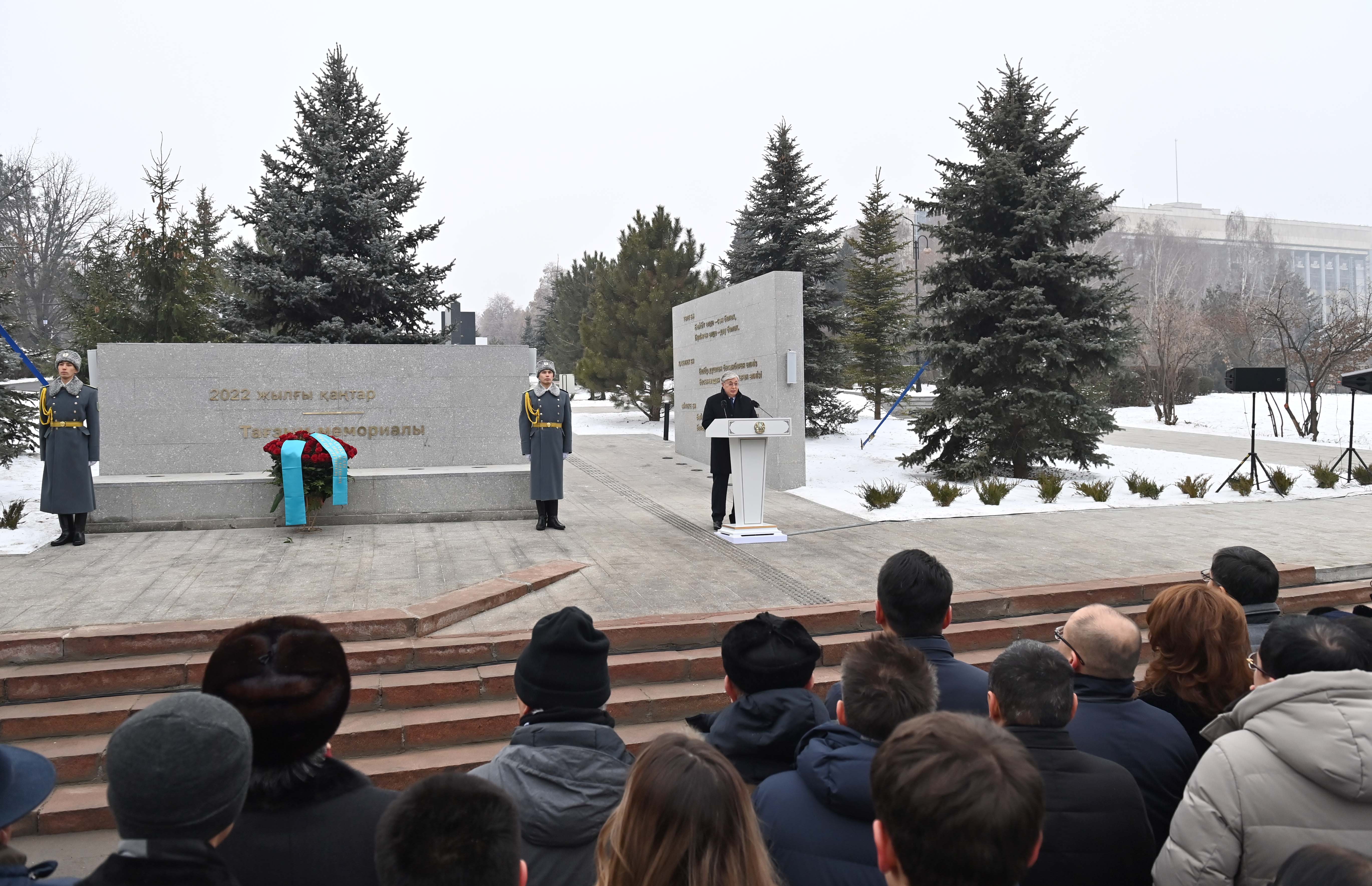 The Head of State emphasized that regardless of any difficulties, we will continue to move forward along the path of reforms.

“I am sure that our people are unwavering in their determination to build a strong state, strengthen and protect our sacred Independence. We will continue large-scale reforms aimed at further democratization of the political system, demonopolization of the national economy and increasing its competitiveness. Since the beginning of the year, a lot of work has been done in a short time. We adopted an updated Constitution at a nationwide referendum. We now face difficult tasks ahead. Our country has embarked on the path of modernization and renewal. Of course, this is only the beginning. This path will not be easy. We all understand that. Our main goal is clear and obvious – it is to build a Just Kazakhstan and a society of equal opportunities for all. I am convinced that together we will succeed,” Kassym-Jomart Tokayev emphasized. 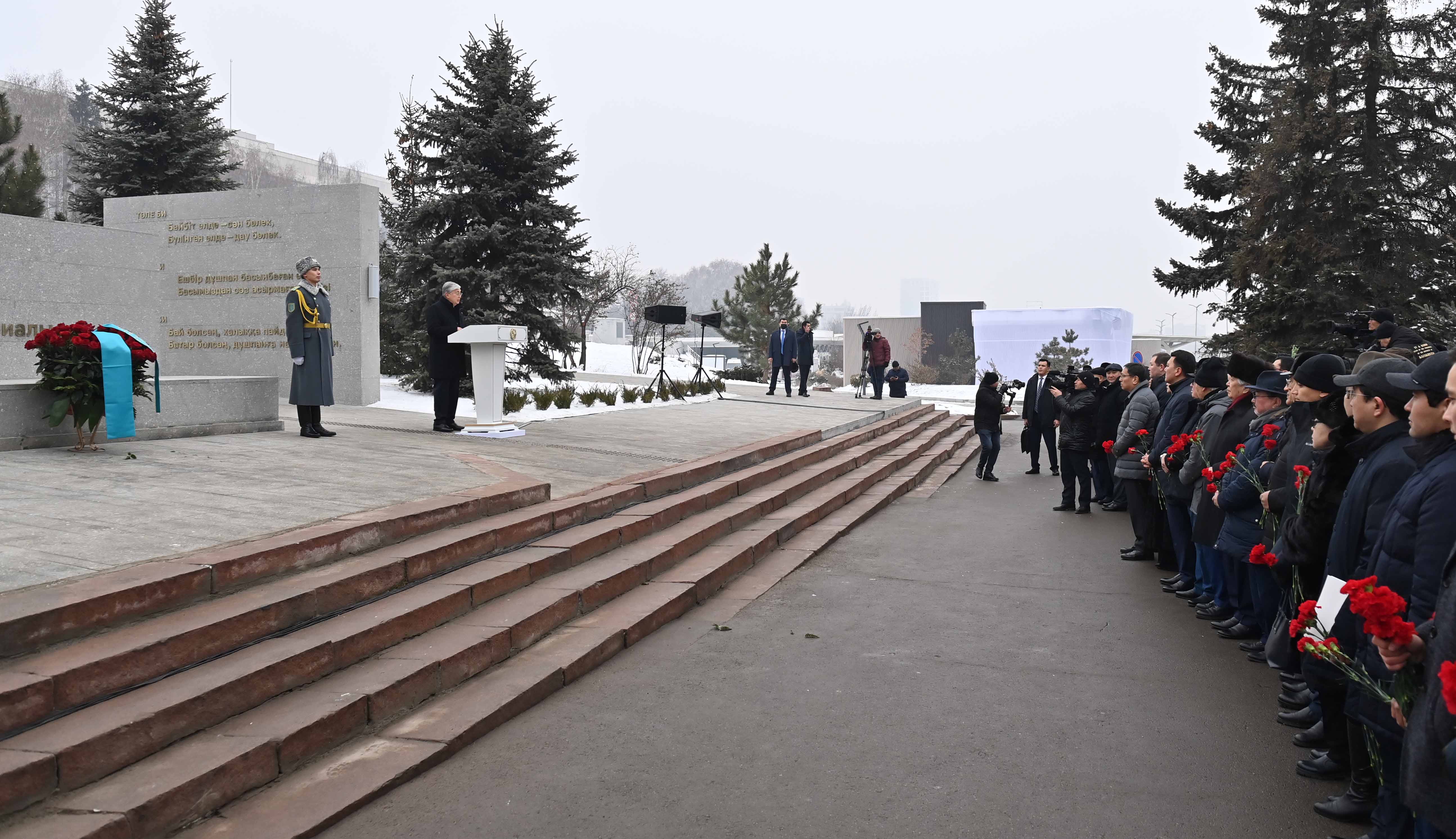 The President noted that in those tragic days thousands of our compatriots - volunteers, medics, policemen and people who cared - showed true courage and high civic responsibility.

“Many of them are participating in today's ceremony. We will always cherish the memory of the victims and the true heroes of the Tragic January. As a nation, we must learn from this tragedy. Law enforcement and special agencies have done a monumental job. The investigation was discussed in Parliament with the participation of deputies, representatives of the Prosecutor General's Office, and the legal community. A huge contribution to the comprehensive consideration of the circumstances of those days and the provision of legal assistance to the detainees was made by public commissions, which included authoritative human rights activists of our country. All this made it possible to establish an objective picture of what happened. As a result, numerous participants in the riots who succumbed to false appeals, but did not commit serious crimes, received an amnesty according to my Decree,” the Head of State said.

The Head of State pointed out that one must not glorify bandits, radicals and terrorists under any circumstances. He stressed that the true heroes are representatives of enterprises, farmers, doctors and nurses, teachers and lecturers, scientists and cultural figures, entrepreneurs and athletes.

In conclusion, the President recalled that the January events became a big and tragic lesson for all of us.

“We realized that stability is the key to well-being and prosperity. We saw that if we do not protect peace in the country, we can lose everything in an instant. We realized that we need to be constantly on guard of our Independence and statehood. We have grasped the true meaning of the saying, ’Do not say there is no enemy, he is hiding behind the rock’. We realized that values such as harmony and unity are paramount. Therefore, we will always remember the Tragic January and its innocent victims. Only by coming together will we be able to overcome any challenges and threats. As President, I will make every effort to preserve the integrity of the state and the well-being of the people,” the Head of State said. 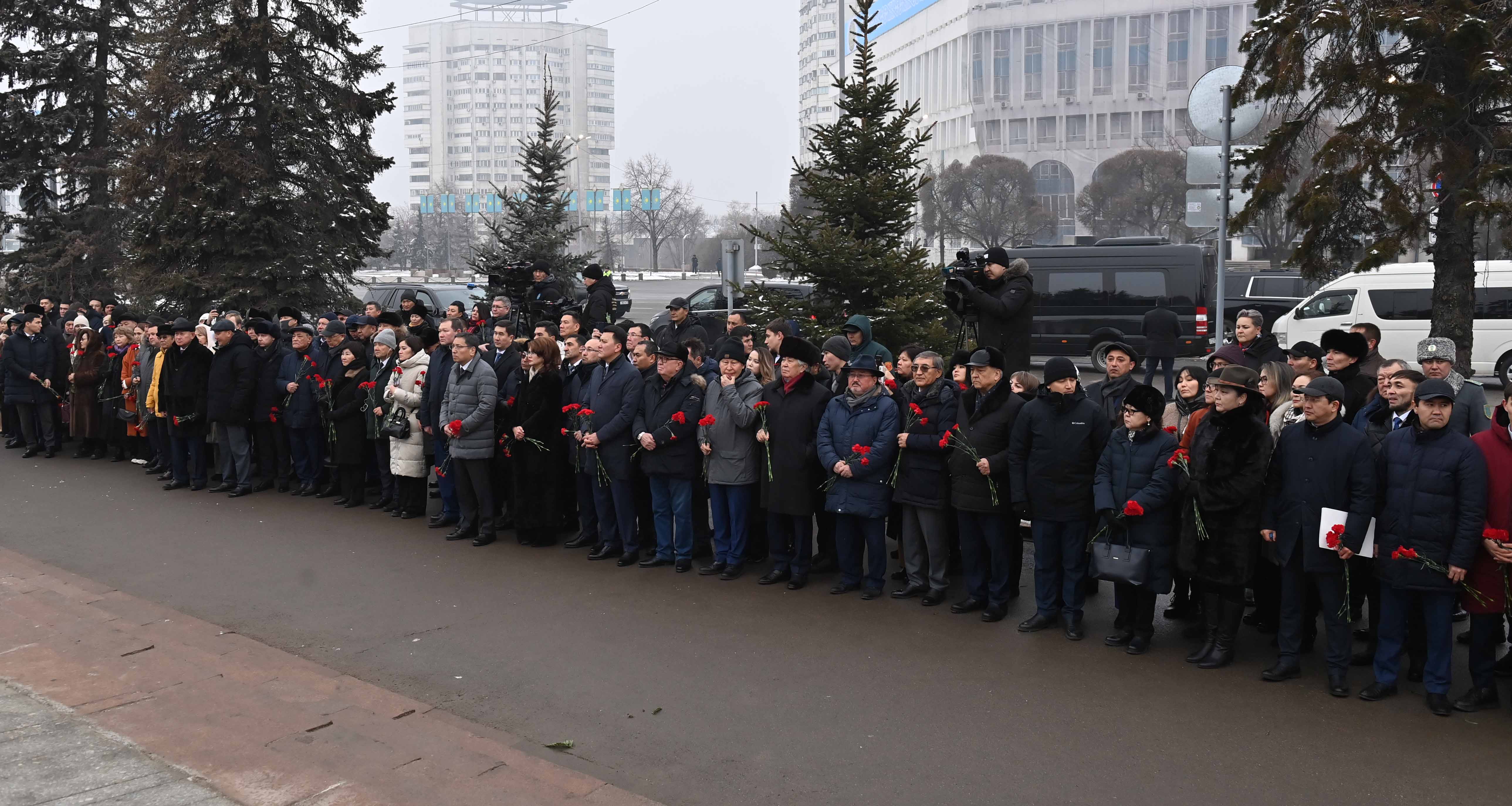 The Tagzym memorial was built on the site that was the epicenter of the tragic events. Republic Square has a sacred significance for our people. The events in Almaty are changing the course of history throughout the country. The memorial will become a place of memory and sorrow, a symbol of wisdom, courage and strength of our people.

The memorial is a multi-stage architectural complex. It is divided into four emotional and architectural zones of different colors: the light gray part signifies overcoming, the black part manifests the January events with their chaos and fear, the gray part is a symbol of victims, shed blood, and human losses. The white part represents the desire for stability and prosperity, a symbol of the maturity of society, self-consciousness of the nation, faith in a strong and just state. Each zone contains stones and steles with quotes from prominent representatives of the Kazakh people.

The authors of the project are young Kazakh architects Alexey Ivzhenko and Gaini Sagidullaeva. 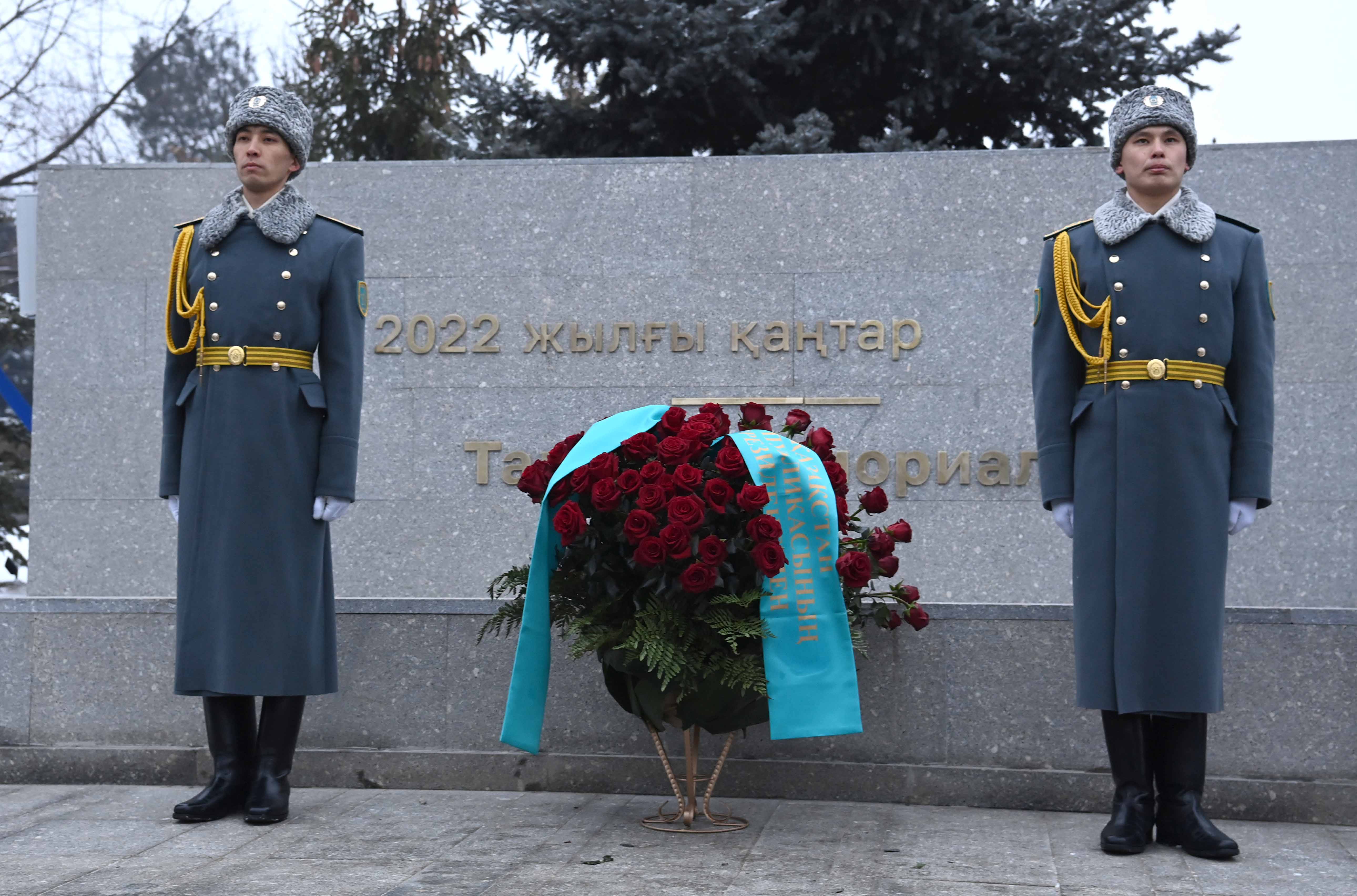 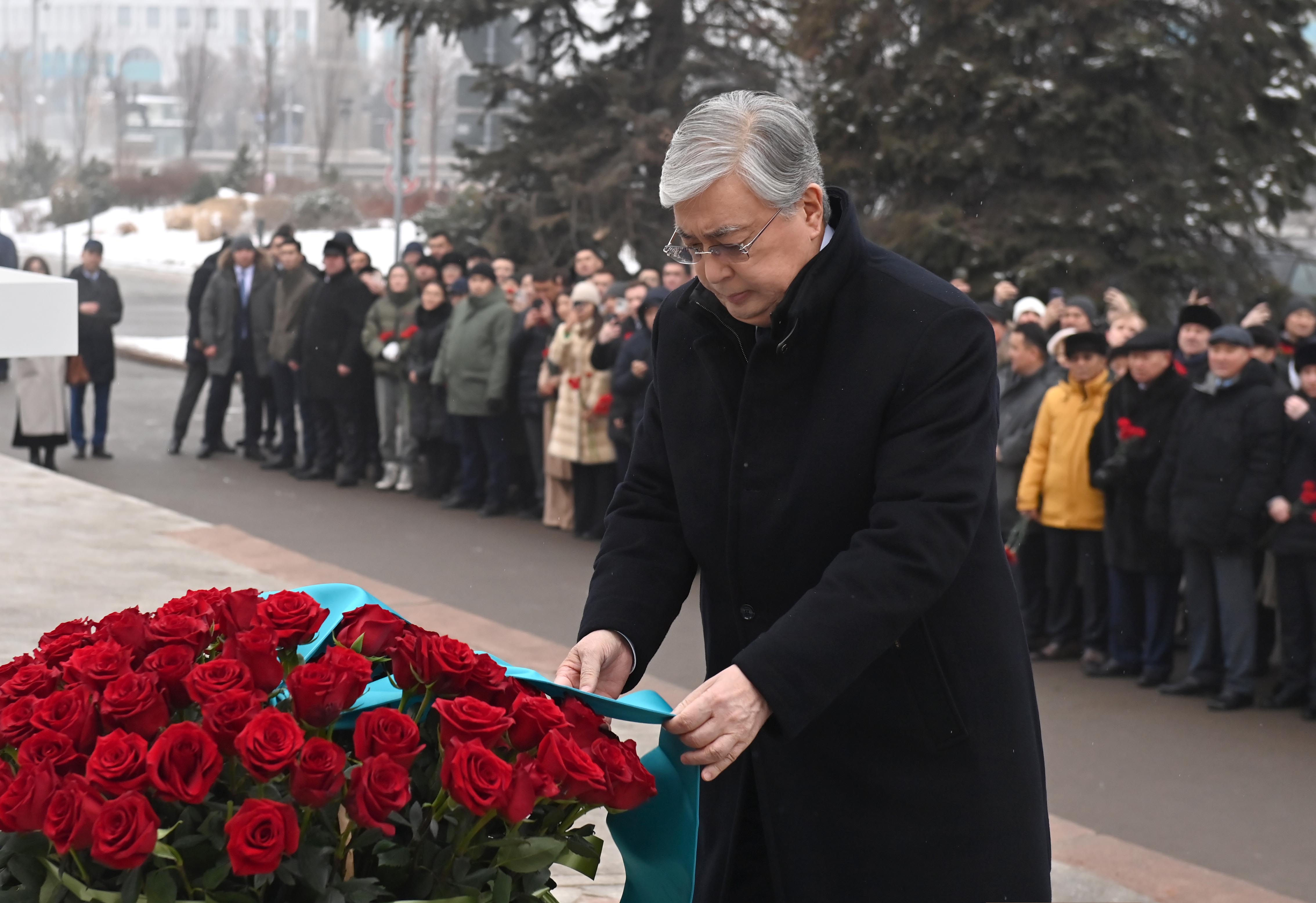 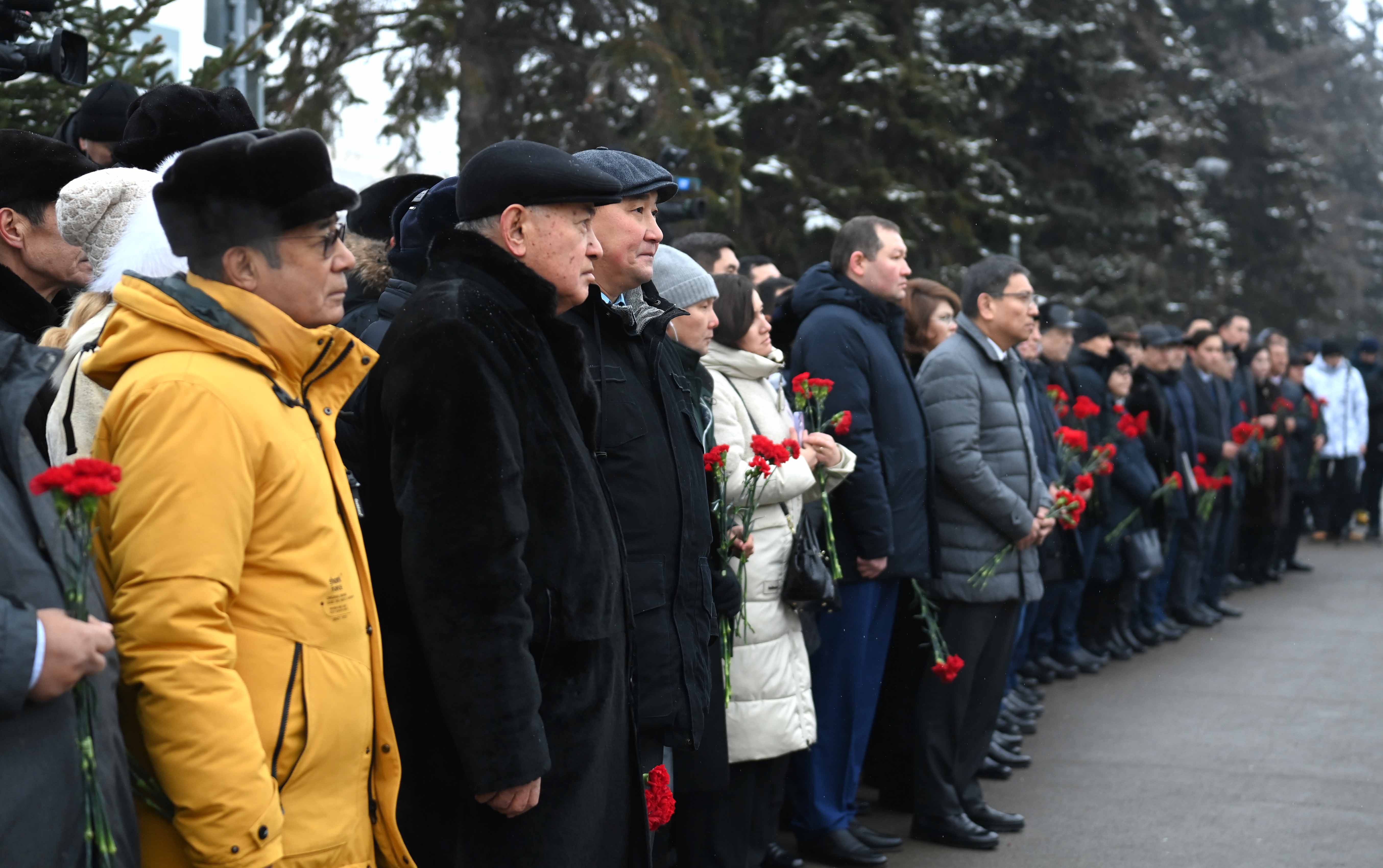 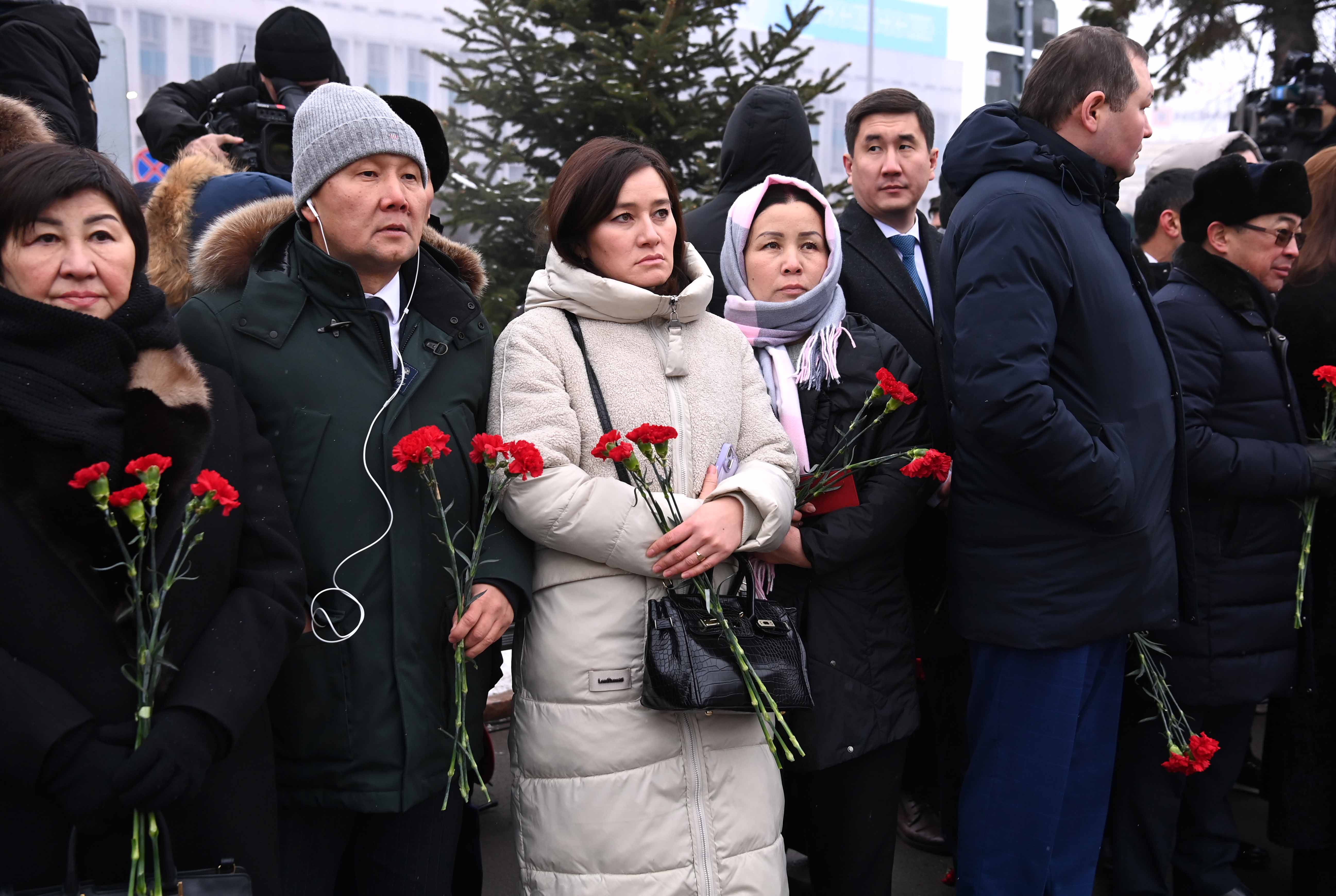 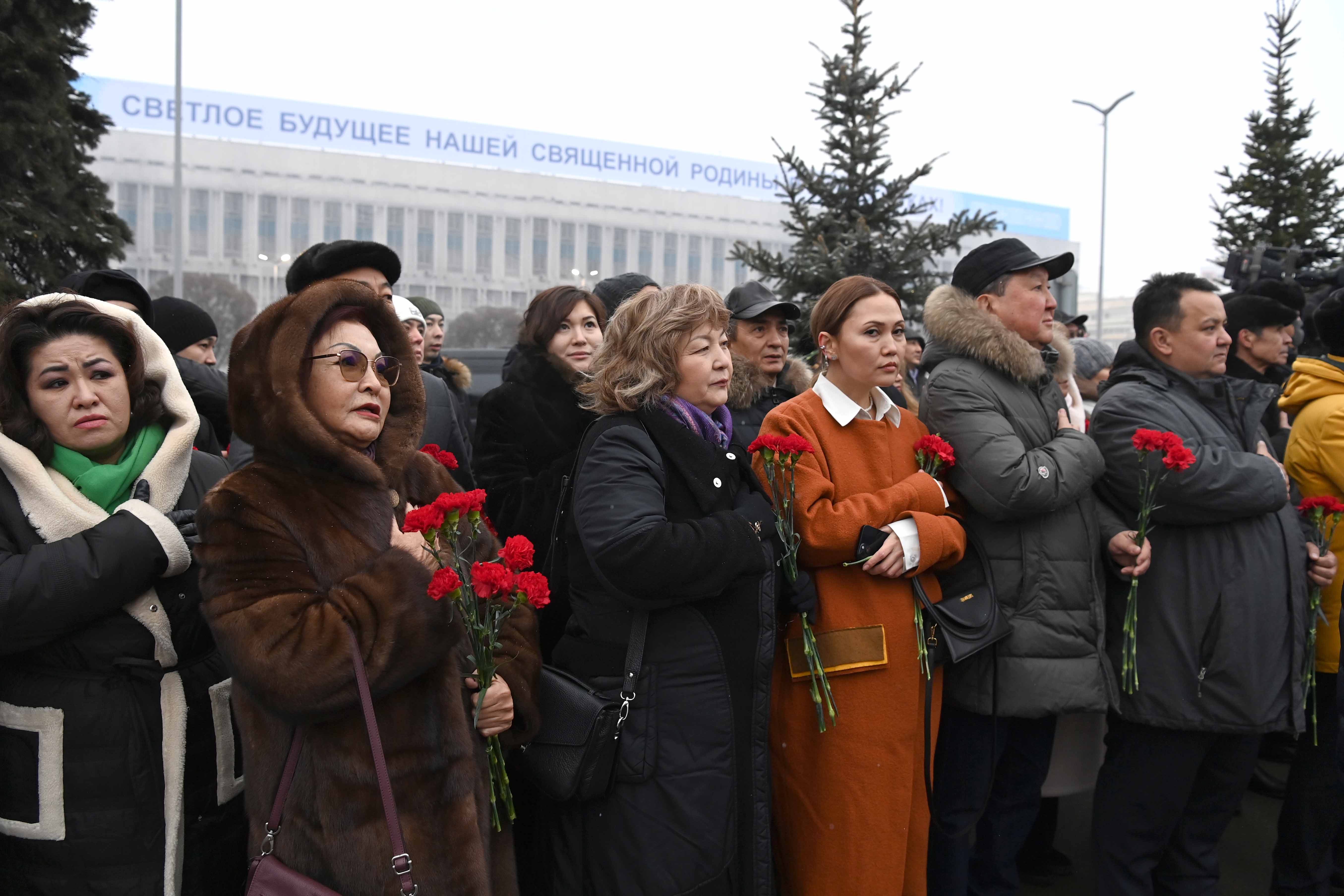 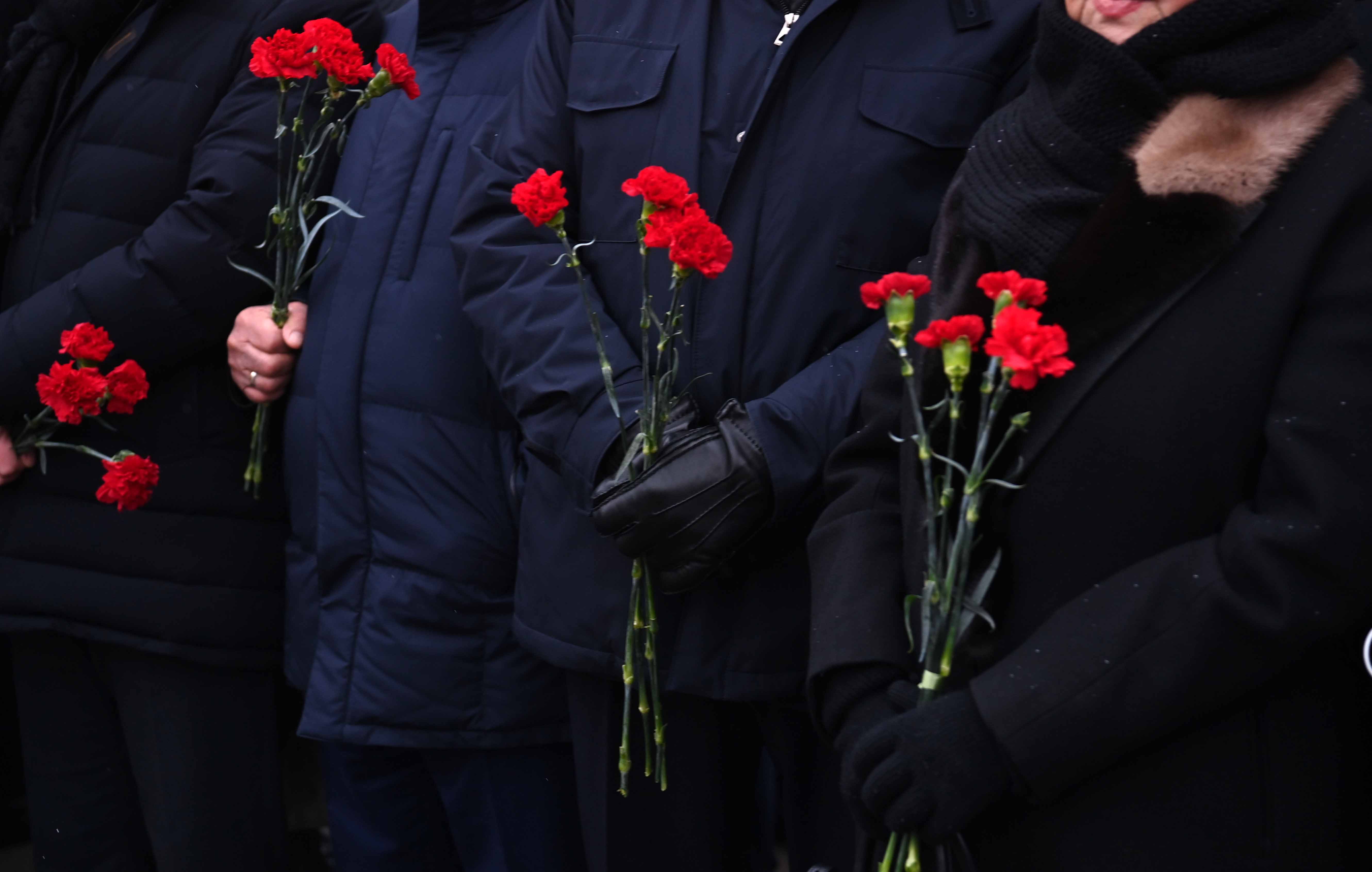 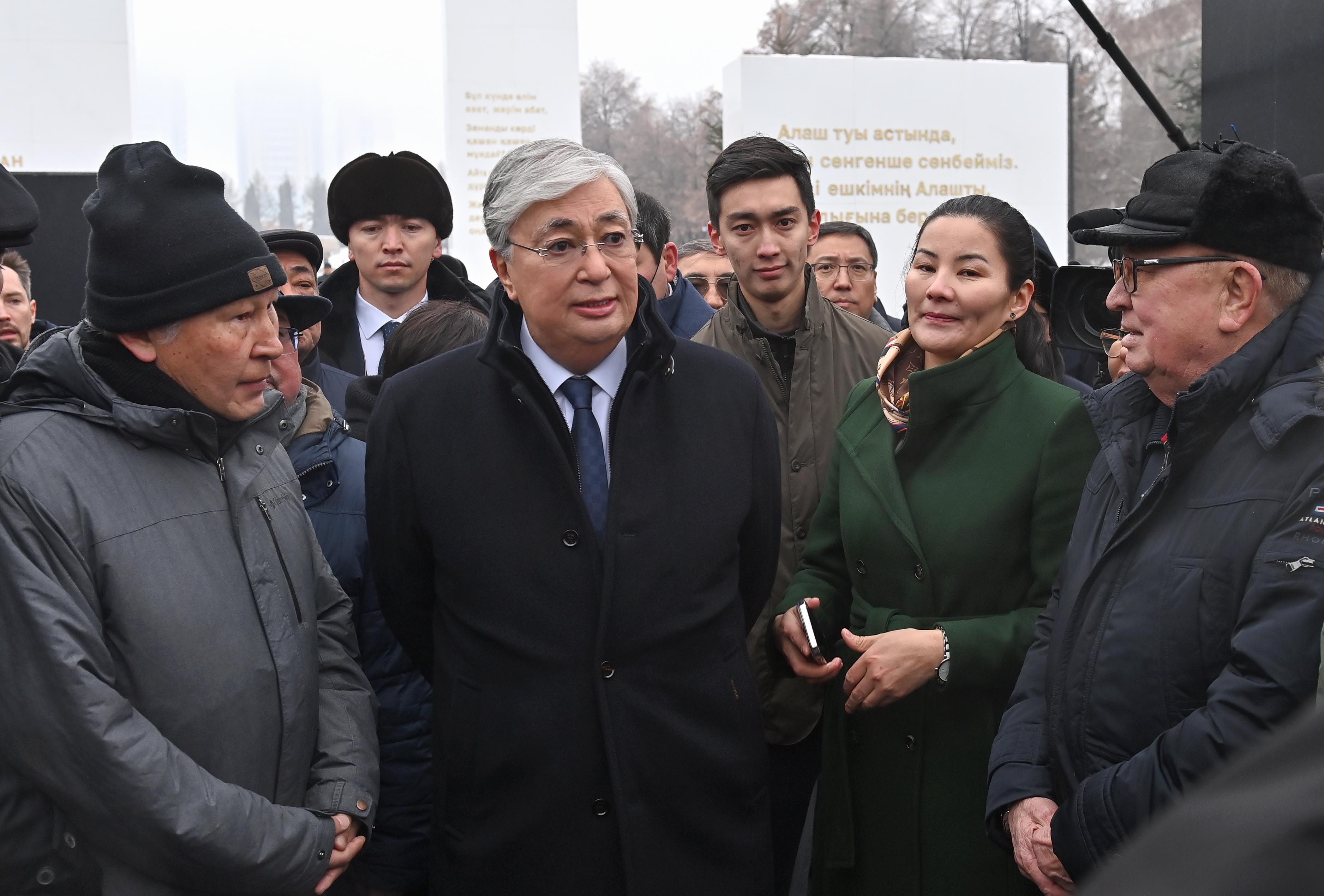 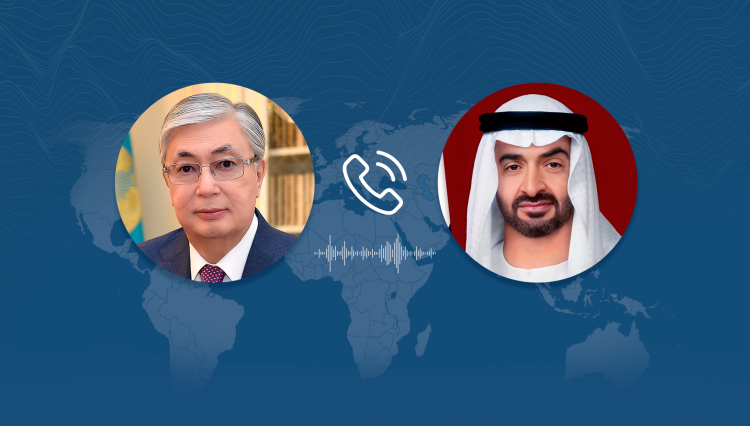