Statement by President Nazarbayev at the Fourth Astana Club Meeting

I am glad to welcome you at the regular meeting of the Astana Club!

For the fourth time this unique dialogue platform has gathered around the table the world's leading experts, diplomats and politicians.

Here, in the heart of Eurasia, we are discussing the most topical issues.

This format is becoming highly in demand today.

Our shared duty is to seek a way out of the destructive spiral of conflict that is intertwined into the global geo-economics and geopolitics.

Therefore, I primarily want to focus on the key markers and risks of the new reality.

First. The growing confrontations between the major powers aggravate the instability of the current world order, making events less predictable.

The so-called “post-bipolar” world order is finally receding into the past.

We are witnessing the formation of the contours of a Greater Eurasia.

The process is influenced by both the changing balance between global players and the growing competition between regional powers.

They are still unable to overcome the fundamental differences regarding the main issue - the future format of the world order.

Second. The aggravation of geopolitical rivalry between Russia, the United States and China is taking place not only in the global context, but also in the perimeter of Greater Eurasia.

Complex challenges have always existed in this strategic triangle.

However, the level of their controllability has been sharply reduced in recent years.

From now on, large-scale crises are possible like never before.

The probability of incidents that could escalate into full-fledged conflicts increases significantly.

It must be clear that misunderstandings and miscalculations in crisis situations can lead to military confrontation.

The current key trend is “shattering” of the foundations of strategic stability.

The situation regarding the agreements on the elimination of intermediate-range and shorter-range missiles (INF) is becoming critical.

The extension of the Treaty on the Reduction of Strategic Offensive Arms, which is valid until 2021, remains suspended.

The collapse of the INF and the problems with the extension of the Treaty on the Reduction of Strategic Offensive Arms will essentially bring down the arms control system.

Global powers may return to an arms race.

Fourth. Economic confrontations have escalated to a phase that many experts openly call trade wars.

One of them is between the USA and China, which account for a third of the global economy, 20% of global exports, and more than a third of direct investment.

This will decrease the growth of the world economy and, as a result, will lead to a deterioration of the situation in developing countries. Poverty and unemployment is a good foundation for terrorism, migration and separatism.

This is exactly the situation in Afghanistan, where the ongoing war has led to such drastic consequences as drug trafficking, terrorism and extremism.

Fifth. The most essential problem of the Eurasian geo-economics is the economic sanctions imposed unilaterally by certain states, and used as a response to counter-sanctions.

Sixth. The probability of a full-scale military confrontation in some parts of Greater Eurasia remains high.

One of the most “explosive” regions is the Middle East.

The instability is caused by the crisis in Syria, the ongoing political tension in Iraq, the civil war in Libya, and internal development challenges in Arab countries.

All these are exacerbated by the breakdown of the nuclear agreement with Iran, which was a challenge to achieve. The world community, including Kazakhstan, was conducting long-term work on this document. Our country has proved the whole world that the possession of nuclear weapons is not a panacea for ensuring security. Having renounced these weapons, Kazakhstan earned the trust of the international community.

Next year, the tangle of unsolved problems may become even more complicated, returning the specter of a big war to the Middle East.

Seventh. Global security continues to be threatened by international terrorism and extremism.

According to the National Consortium for the Study of Terrorism and Responses to Terrorism, there were approximately 10 thousand terrorist attacks in the world in 2017, killing more than 26 thousand people.

Eighth. 2018 has convincingly shown that cybersecurity is becoming a completely new dimension of global stability.

The clash between the major powers is transferred to this space.

In the coming years, the safety of nuclear and other strategic facilities that can be disrupted by cyber technology will be more relevant.

Ninth. Another important issue is the security of the communications we use.

Countries are constrained by the factor of strong economic interdependence that has developed as a result of globalization.

However, trade wars and sanctions will erode the value of this factor.

Global uncertainty leads to a balance of countries on the cutting edge of a new “cold war”, the consequences of which will be absolutely disadvantageous for all.

The world armed with nuclear weapons cannot afford a new bloody outcome, as well as building a new world order for the third time on the fragments of the “old world”.

Because there will be nothing to build and no one left.

It is necessary to prevent a new global catastrophe, which has already acquired quite clear outlines.

The world community must unite to address common challenges.

During the ASEM forum in Brussels, I spoke about the perils of this international situation, similar to the Caribbean crisis of the early 60s.

Recently, in Paris, it was said that World War I and World War II began due to the lack of negotiations, the lack of a dialogue. My proposal was that the great powers, especially the United States, the Russian Federation, the People's Republic of China and the EU countries, should always take  great responsibility in addressing the issues of the international agenda through the prism of the future of humanity.

My proposal: the United States - the Russian Federation - the People's Republic of China - the EU should find new formats of dialogue, if we are talking about the fate of our civilization. After the First World War, the powers created the League of Nations. Then, after the Second World War – the United Nations. It is obvious that to settle the arising confrontations is a difficult challenge. Nevertheless, I proposed  Astana as a platform for these four parties to discuss the problems in the sphere of economics, politics and security.

First. I consider it necessary to update the 1975 Helsinki Final Act.

In this regard, I propose to hold a similar conference on security and cooperation in 2020 – dedicated to the 45th anniversary since the adoption of the strategic document.

We understand that the process of concluding a new agreement will not be easy.

Therefore, it is advisable to start preparing for the final negotiations in 2019. Since our country was the organizer of the only OSCE Summit at the beginning of the 21st century, Kazakhstan is ready to initiate an event of this format in the future.

Of course, a lot will depend on the position of the great powers.

In this regard, I would like to urge the big players to work together to conclude a new agreement.

Second. To ensure strategic security, the nuclear powers should build a dialogue of trust among themselves.

It is necessary to enhance negotiations on the further reduction of nuclear arsenals and on the creation of nuclear-weapons-free zones. Many years ago, we adopted the Treaty on the Non-Proliferation of Nuclear Weapons. However, despite the Treaty, some states acquired nuclear weapons. The reason for this was the lack of sanctions, which are provided for in that Treaty.

Kazakhstan, a country that voluntarily renounced nuclear weapons, as one of the leaders of the global anti-nuclear movement, once again calls on the international community to build a nuclear-weapons-free world. In 1991, in the era of the Soviet Union, I raised the question of closing the largest nuclear test site in Semipalatinsk, where nuclear tests had been secretly carried out for a long time. It was not an easy task - to force the Soviet leadership and the military-industrial sector to close the test site. Subsequently, the same decisions were made around the world in respect to similar test sites. This work has been ongoing. Former US President Barack Obama initiated a number of anti-nuclear meetings where Kazakhstan took an active part. At the 23rd session of the UN General Assembly, I also launched Manifesto “The World. The 21st century”.

Solutions need to be developed at the negotiating table under the auspices of the World Trade Organization in a multilateral format.

The Ministerial Meeting of this Organization will be held in Astana in 2020.

We see a way out of the situation in the development of common fair rules for trade and investment cooperation.

In addition, the solution to the problem of trade wars must be sought in reforming the WTO.

The agreements governing the activities of this Organization should include mechanisms that increase the price of non-compliance with the rules.

I think its establishment is only a matter of time.

Kazakhstan's initiative –the Conference on Interaction and Confidence Building Measures in Asia – could be the foundation for the future Organization for Security and Cooperation in Asia. In cooperation with the OSCE, this Organization could contribute to the creation of a security zone throughout the Eurasian subcontinent.

To bring this idea to reality, as a first step, I propose to hold a joint consultative meeting of the OSCE, CICA and the ASEAN Regional Forum.

The secretariats of these forums could meet to reconcile positions. The official opinion of Kazakhstan will be communicated to all the mentioned organizations.

Fifth. It is advisable to hold in Astana a Eurasian conference on security. At the same time, holding such a meeting is of fundamental importance regardless of the venue.

This can be done within the framework of the Astana Club. Its organization can use the experience of holding reputable forums, such as the Munich Security Conference.

Sixth. The international community needs to form a global strategy for cooperation in developing the information space.

The Eurasian space has always been the main stage of history.

But only in the last few years the real outlines of Greater Eurasia have emerged for the first time.

The basis for this is the effective interaction of the Eurasian Economic Union, the European Union and the “One Belt One Road” Project.
Kazakhstan, by being part of a huge Eurasia, has always been in favor of an open dialogue and adopted a peacekeeping policy, making efforts to reconcile the conflicting parties, and often achieved success in this matter.

Our historical mission is to connect worlds.

This is also the meaning of holding the Astana club meetings.

In the next few days we will probably hear new, innovative ideas for the further development of Eurasia for the benefit of all the countries of the continent.

I hope that many of them will be perceived by politicians and governments as practical recommendations for action.

In the current global world, there are no bilateral conflicts that only hurt its participants.

By consolidating efforts, we can contribute to conflict resolution and increase the well-being of peoples not only on the Eurasian continent, but throughout the world. I believe that if we want to save the planet for future generations there is no other alternative.

Thank you for your attention! 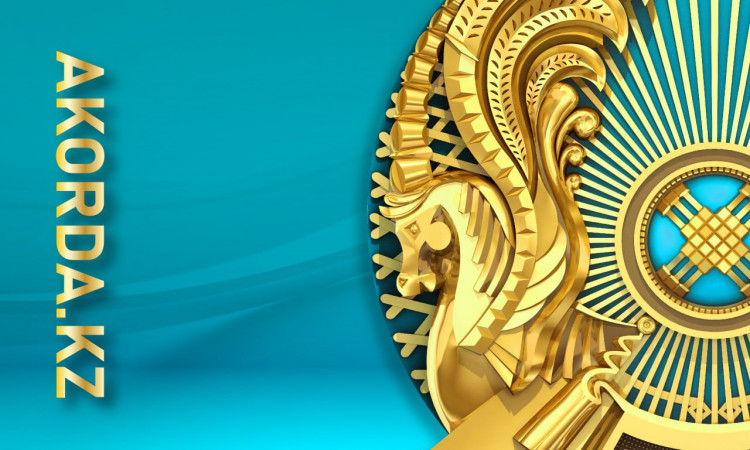